Corrupt Georgia Republican Secretary of State is now proposing that the state go to ranked choice voting in the state indicating that he wants to ensure corrupt and bogus elections in the state for eternity.

We first learned of Raffensperger after the 2020 Election.  He certified the election for Joe Biden three days after Election Day.  This is after finding out that Raffensperger signed two agreements with Hillary attorney Marc Elias that changed the laws in the state related to absentee ballots.

Raffensperger oversaw the corrupt acts in the state reported to him the night of the election via Carter Jones.  This information was kept from President Trump and the rest of the country for half a year.

Raffensperger had three independent assessments of the election activities in the state presented to him after the election and he ignored all three.

The Carter Jones memos were ignored and the election certified despite rampant corruption and mis management.

Georgia State Senator and former Judge William Ligon and President Trump’s auditor in Georgia have never heard from Raffensperger despite rampant corruption and anomalies identified in the 2020 Election.

Raffensperger told the President of the United State that he would address the issued identified by his auditor but he never has.  It was a lie.

Now per the Reason website, Raffensperger is wanting to destroy Georgia elections for good.

Currently, Georgia is one of only two states that requires runoffs for both primary and general elections if no candidate receives a majority. A 2021 law shortened the time between the general and the runoff from nine weeks to four. With only a month in which to vote and barely enough time to request, receive, and return a mailed ballot, voters in large counties contended with long lines at the polls. The state also spent millions to conduct the second election, including more than $10 million in the Atlanta metro area alone.

Speaking to The New York Times last week, Raffensperger said he would petition the state legislature with three separate proposals. One would force large counties to open more locations for voting early. Another would lower the vote total needed to avoid a runoff from 50 percent to 45.

The third proposal is the most consequential, and the most interesting. Raffensperger will also state lawmakers to consider switching to a ranked choice ballot for future elections.

In this system, voters rank each candidate on the ballot in order of preference. When the votes are tallied, if no candidate wins a majority, then the lowest performer is eliminated; that candidate’s votes are then recounted with the voters’ second choices counted first. This repeats until one candidate passes 50 percent. Proponents of ranked choice call it an “instant runoff” system, as it obviates the need to hold a runoff election at a later date.

Raffensperger will destroy elections in Georgia for good if this goes through.  He’s done enough damage to the peach state.  Let’s hope the Republicans in the Georgia legislature aren’t Democrat-leaning like Raffensperger. 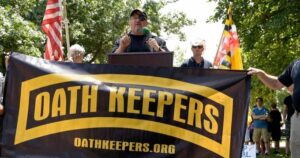 Previous post Feds in the Shadows: Leaked Documents Indicate over 300 Members of Oath Keepers May Be Current or Former DHS Employees – Not Clear How Many Are Federal Operatives

Next post Inflation Rate Up 7.1% In November from One Year Ago – Still the Highest Rates Since 1982 – Joe Biden Calls This “Progress”
Enter Your Information Below To Receive Free Trading Ideas, Latest News And Articles.
Your information is secure and your privacy is protected. By opting in you agree to receive emails from us. Remember that you can opt-out any time, we hate spam too!