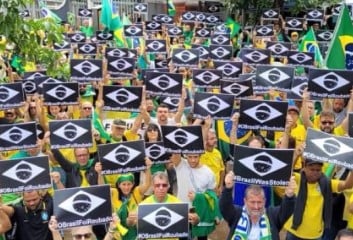 Patriotic protestors pray for the Military to save Brazil

Criminal charges have been filed with the Military Supreme Court calling for the arrest of leftist Chief Justice Alexandre de Moraes. Massive protests are scheduled for the weekend in Brazil, as the demonstrators call for the Army to intervene.

The Brazilian military continues to mobilize, according to posts on GETTR.

A police SWAT unit chanted at Lula supporters “Watch out, you bastards, Bolsonaro is President of Brazil!”, wearing Christian crosses Crusader-style, amping themselves up for action.

Protestors outside the Army Headquarters in Brasilía chanted that “The Brazilian people authorize President Bolsonaro to intervene.”

Mass protests are scheduled for the weekend. The Brazilian military is asking for volunteers to join up.

There’s a fresh news going on here in Brazil that the STM (Military Supreme Court) has accepted the request of the Justice Court of Amapá, to incarcerate Xandão on a preventive order, so lots can happen in the next 24/48 hrs!

Retired General and Deputy Girão Monteiro posted on Twitter: “A message to everyone excited and flirting with communism: We have reacted before. If necessary, we will give our lives to defend the freedom of our people. It is not undemocratic to invoke Art. 142″ of the Brazilian Constitution, which empowers the military to act in conflicts between branches of government. “Those who are breaking the law should be afraid.”

The President’s son, and Delegate Flávio Bolsonaro said he believes Chief Justice Alexandre de Moraes “is indeed capable of arresting Jair Bolsonaro. He is crazy. He is clueless. He is not respecting the law or the Constitution. The Senate and the other Supreme Court justices are not doing anything. So anything can happen, it’s worth giving all!”, according to journalist Paulo Figueiredo Filho.

Flavio Bolsonaro denied reports by mainstream outlet UOL he had admitted Bolsonaro would step down and hand over power to Lula.

According to leaked names, Corrupt Communist convict Luiz Inácio Lula da Silva will purge the military high command if he seizes power, putting pressure on the patriotic command to act now. Major protests are announced for the weekend in Brazil. The official certification ceremony of Lula’s steal is set for Monday, 12/12.

Speaking to Tucker Carlson, Brazilian political strategist Rodrigo Neves said that Twitter tampered with the Brazilian elections. “They editorialized the Trending Topics, which normally show whatever content is viral. Organic trends with over half a million mentions were completely absent. Meanwhile, fresh hashtags out of Lula’s headquarters would get on trending topics in a few minutes.”

When Elon Musk announced his takeover of Twitter, Twitter Brazil “entered panic mode”, Neves said. “A lot of right-wing accounts were removed from shadowban. Bolsonaro wound up getting 100.000 new followers within a few hours.”

I’ve seen a lot of concerning tweets about the recent Brazil election. If those tweets are accurate, it’s possible that Twitter personnel gave preference to left wing candidates.

The post “Watch Out, You Bastards, Bolsonaro is President of Brazil!” – Charges Filed in Brazil for Arrest of Corrupt Socialist Supreme Court Justice appeared first on The Gateway Pundit. 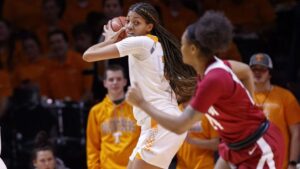 Next post Kari Lake Calls On Elon Musk To Release All of Katie Hobbs Twitter Files And Unblock The Gateway Pundit On Twitter
Enter Your Information Below To Receive Free Trading Ideas, Latest News And Articles.
Your information is secure and your privacy is protected. By opting in you agree to receive emails from us. Remember that you can opt-out any time, we hate spam too!