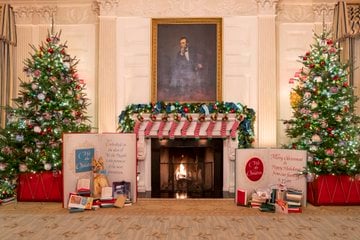 Joe and Jill Biden are devout, church-gong Catholics who make a point of being seen by the media meeting their weekly obligations for attending mass. Yet the Bidens have a cruel streak in them that manifests itself at Christmastime when children and family become the centerpiece of the celebration of the birth of Jesus. 2022 display features nine stockings but none for Navy Joan.

For the second year in a row, Joe and Jill Biden have snubbed their young granddaughter Navy Joan by not hanging a Christmas stocking for her at the White House even though stockings were hung for their six other grandchildren as well as their two new pets (dog Commander and cat Willow) and new grandson-in-law Peter Neal. Navy Joan Roberts is the out-of-wedlock daughter of Hunter Biden and Lunden Roberts.

Last year the stockings were quietly taken down after the Bidens were called out for their snub of Navy Joan, rather than add one to the six displayed for Naomi, Finnegan, Maisy, Natalie, Hunter and “Baby Beau”.

Christmas stockings for the Biden grandkids hang from the fireplace mantel in the State Dining Room, which celebrates the gift of family. Trees are decorated with Biden family photos, as well as photos of other first families during the holiday season. pic.twitter.com/zmGVldnBGP

As our country gathers for the holidays, traditions may vary, but our shared American values — a belief in possibility, optimism, and unity — endure each season.

Room by room, visitors will be reminded of what brings us together during the holidays, and throughout the year. pic.twitter.com/IpQ9rUc2F4

Breitbart’s Charlie Spiering observed a few more stockings were added to last year’s count, but not for Navy Joan, “Last year, they were mocked for featuring their six grandchildren and ignoring their illegitimate grandchild Navy Jones (sic). Looks like Naomi’s new husband Peter gets a stocking this year as well as pets Commander and Willow.”

The Bidens put 9 stockings on the fireplace this year.

Last year, they were mocked for featuring their six grandchildren and ignoring their illegitimate grandchild Navy Jones.

Looks like Naomi’s new husband Peter gets a stocking this year as well as pets Commander and Willow. pic.twitter.com/wceRvU5TFo

The White House describes the State Dining Room stocking display as “We the Children”.

State Dining Room – We the Children
Embodied in the idea of We the People is the promise of the next generation. In the State Dining Room, the décor celebrates the childlike wonder that makes the holiday season a favorite time of year for so many. The ornaments on the Christmas trees were crafted as self-portraits by the students of the 2021 Teachers of the Year from across the country, ensuring that children see themselves in this year’s holiday display.

Hanging from the fireplace mantel are the traditional Biden family stockings for Santa to fill on Christmas Eve, always with an orange in the toe (a tradition from the First Lady’s grandmother). 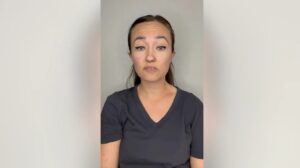 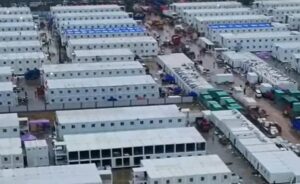 Next post China Is Building The World’s Largest Quarantine Camp In Guangzhou with 90,000 Isolation Pods — This Is The World Economic Forum’s ‘Role Model’ For The Global Community
Enter Your Information Below To Receive Free Trading Ideas, Latest News And Articles.
Your information is secure and your privacy is protected. By opting in you agree to receive emails from us. Remember that you can opt-out any time, we hate spam too!