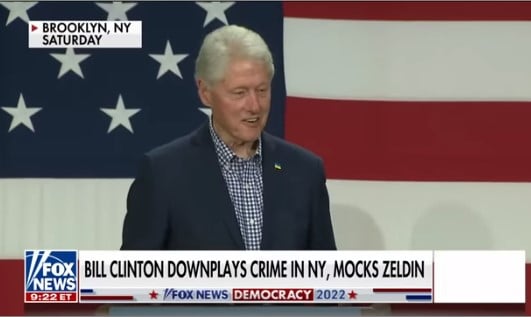 In recent weeks, as crime and violence soar throughout the state, Republican Lee Zeldin has taken a lead in the polls over the ineffective Hochul.  The latest Trafalger poll shows  Zeldin holding a 48.4 to 47.6 lead in the race. At the event for Hochul, he dismissively laughs before saying, “Lee Zeldin makes it sound like Kathy Hochul goes to the nearest subway station, passes out billy clubs and baseball bats. Looks like he’s looking to replace Dwayne Johnson in all his movies.”

Clinton’s comments are as insulting as they are clueless about what is worrying many voters in the state.

Particularly insulting is Clinton’s “joke” about New York’s subway system which very real and violent crimes have passengers on edge.

Is it amusing that a woman begged for help on the subway as a man violently grabbed her hair and held her captive for a brief period while no one helped?

Or was it the 78-year-old man who was brutally beaten?

Maybe he is just chuckling at the many,  many, many incidents of innocent riders being shoved from platforms onto the tracks.

Perhaps he has taken the lead on his strategy from Hochul herself, who appears utterly clueless as to the seriousness of the crimewave or the importance New York voters has place on it.

In the only debate between the two challengers, Hochul seemed baffled when Zeldin raised the issue of rampant crime in the state saying she “didn’t know why that’s so important.”

Hochul has dismissed the crime fears of New Yorkers by suggesting that a few high-profile crimes have “created a sense of fear in people’s minds.”

Tuesday’s election will tell us if New York voters think it is funny. 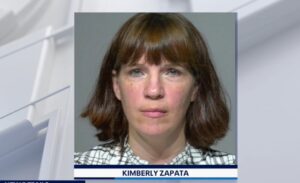 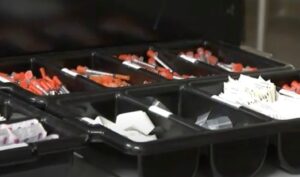 Next post Leftist Drug Policies Led By NY Gov Kathy Hochel Destroy New York
Enter Your Information Below To Receive Free Trading Ideas, Latest News And Articles.
Your information is secure and your privacy is protected. By opting in you agree to receive emails from us. Remember that you can opt-out any time, we hate spam too!