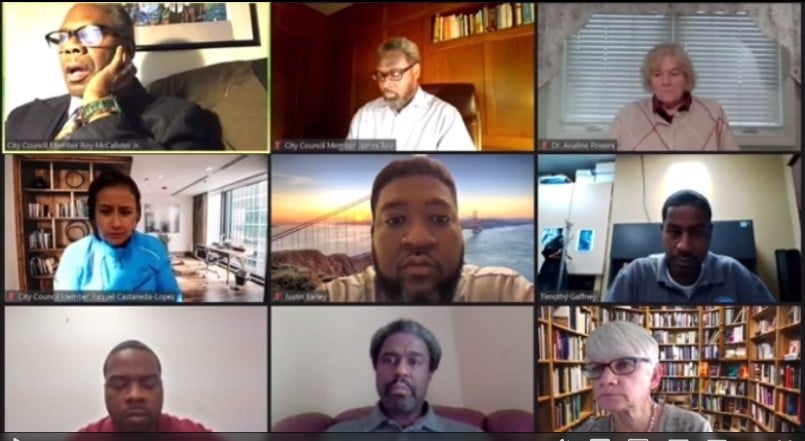 During the hearing in the 3rd Circuit Court of MI Judge Kenny repeatedly berated Attorney Dan Hartman and allowed the defense lawyer David Fink to go off on political rants about “right-wing fever dreams” and “election deniers.” (around the 3 hour mark)  Attorney Fink accused Hartman of racism despite the fact that the lawsuit was filed by Kristina Karamo who is a black female conservative running for Secretary of State in Michigan.

Detroit Election Consultant Chris Thomas explained during the hearing how mailed absentee ballot signatures are verified. When Hartman asked how Detroit verifies signatures on ballots emailed to military overseas, Judge Kinney blew up at him and suggested he was attempting to disenfranchise the votes of military members, adding that he has a son who served 5 years overseas, which of course, had no relevance to the case.  This was a bogus argument.

An animated Hartman explained the point of questioning how signatures from overseas ballots are verified, “What I’m trying to prevent is the person that is sitting in China—who hasn’t been to the United States or Detroit in 18 years—who may or may not exist—from casting a ballot through this lack of election security!”

“And I’m tired of being called a racist by Mr. Fink,” Hartman added. “I’m tired of Mr. Fink saying I’m trying to disenfranchise the heroes in the military when I’m trying to secure this election!” a frustrated Mr. Hartman said.

Mr. Hartman asked about the process for verifying signatures during the hearing.

When Attorney Daniel Hartman asked Daniel Baxter, the Election Administrator in the Detroit Metropolitan Area, about drop boxes, Baxter responded by saying that Detroit’s 20 ballot drop boxes are all monitored by surveillance video, but he could not confirm if they are under 24-hr camera surveillance.

Detroit was neck deep in the Konnech election systems, a company that stored their data on China servers.

He also told Mr. Hartman that the city no longer uses anything from Konnech, an election software company whose CEO was recently arrested for allegedly storing poll worker data in China.

According to WDET– The City of Detroit canceled their contract with Konnech only days after he was arrested in Michigan as part of a Los Angeles Co.-based investigation.

Konnech had a five-year, $2.9 million contract with the county to administer poll worker assignments, communications and payroll. LA County prosecutors found that Konnech was storing information in China in violation of the agreement.

“Data breaches are an ongoing threat to our digital way of life,” LA District Attorney George Gascón said in a statement. “When we entrust a company to hold our confidential data, they must be willing and able to protect our personal identifying information from theft. Otherwise, we are all victims.”

Detroit had a similar contract with Konnech for the use of its PollChief software, which is said to have the ability to send mass letters, emails and phone calls to polling locations and record responses of election workers. The $320,000 contract, approved last year by Detroit City Council, was set to expire in June 2024. According to city and federal records, Konnech had worked with the city on several specific applications for more than a decade, including ballot “fast scanning” software and a mobile app for Uniformed and Overseas Citizens Absentee Voting Act (UOCAVA) returned ballots.

Following news of Yu’s arrest, Detroit terminated its current contract with Konnech. In a statement, City Clerk Janice Winfrey upheld the integrity of Detroit’s election process and the security of employee information.

“Our data, which is now back under our exclusive control, was housed on servers located in Lansing, Michigan. Konnech, per its contract, only provided logistical and call center support,” said Winfrey. “Out of an abundance of caution, all proper steps are being taken — including the termination of Konnech’s contract. My staff and I are confident that the 2022 election process will run smoothly delivering, after all votes have been counted, an unimpeachable work product.”

But now there are questions about the use of Konech systems in Detroit, Michigan elections.

In a Detroit City Council Meeting on October 14, 2020, Timothy Gaffney, the Detroit Manager of Elections said this about the county’s use of the Konnech systems:

So the point of this Konnech contract was for us to actually have the ability to mass scan AV [Absent Voter] Applications. Right now, it’s a manual process where we have to actually enter them in one by one to get them done. So what we had to do was construct a software where we can scan 2,000 applications in a minute and then download a CSV file and upload it to our Qualified Voter File.

Actually, what we would do is actually pull a file from our qualified voter file. We match the voter information with the voter ID number. So from that process, the way we have it, cause they [Konnech] built it for us. The way it’s actually developed is it matches both names, pulls the signature off the application, it matches, it puts signatures side-by-side from the application and also from our Qualified Voter File. So, a human would still be there saying that this person’s signature is this person’s signature. I [??] that file, and then I upload to our Qualified Voter File. The Qualified Voter File will give us an error report if anything doesn’t match [??].

Director Gaffney explained they did not use the software for the August 2020 primary due to disbursement issues with their grant funding.

Diggersleuth was able to dig up the video from this meeting.  And Diggersleuth also found the exact title of Konnech Contract No. 3045877, approved in October 2020 by the City of Detroit for the amount of $186,624.00.

Grant funding, by the way, was supplied by the Center for Tech and Civic Life, colloquially known as Zuckerbucks and funded by Mark Zuckerberg.

It was unclear in the video of the City Council meeting if the software would be utilized for the November 2020 election. They wanted to make sure the technology was fool-proof. As Director Gaffney stated, “we try not to introduce anything new that would change the process too close to the election” and that “at this time, I would prefer to go with the manual hand process [for November 2020]. I would not like to introduce anything this close to the election.”

Here’s the embed code from the Detroit City Council meeting where they discuss their contract with Konnech: 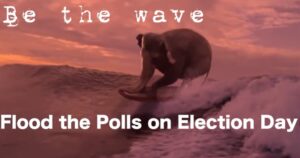 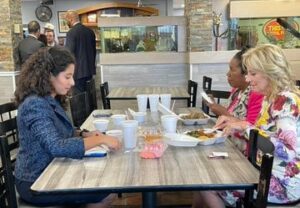 Next post Jill Biden Campaigns in Black Churches in Houston, Dines at Soul Food Restaurant: “Fried Chicken, Ox Tail, Collard Greens and Sweet Tea”
Enter Your Information Below To Receive Free Trading Ideas, Latest News And Articles.
Your information is secure and your privacy is protected. By opting in you agree to receive emails from us. Remember that you can opt-out any time, we hate spam too!