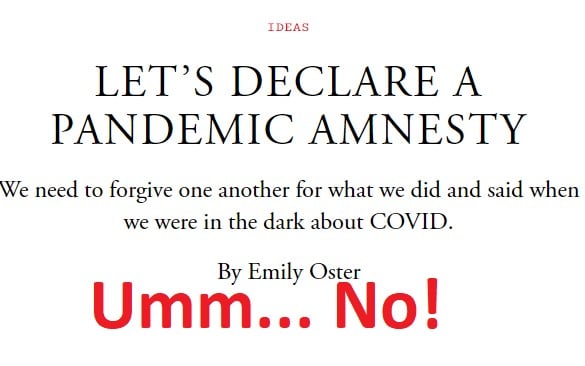 The Atlantic published an article on Monday suggesting we, “Declare a pandemic amnesty” and forgive one another for what we did and said during the pandemic.

Forget that they stopped military pilots from flying and forced thousands of our men and women in uniform out of service.

Forget they wanted to keep us from religious services.

Forget that medical professionals, first responders and every day citizens lost their jobs.

Forget that a 15-year-old boy killed himself because he was bullied for being unvaccinated by tormentors emboldened by leftists.

Forget that life-saving medical services were withheld for being unvaccinated.

Forget that our loved ones died without any family members at their side.

Forget that they lied about the origin of the virus.

Forget that they blocked effective treatments for the virus and forced millions to take ineffective and dangerous vaccines!

They want us to forget they kept us from visiting elderly family members while ghouls like disgraced former New York Governor and vax pusher Andrew Cuomo allowed thousands to die alone in nursing homes. They locked our senior citizens away in their most vulnerable state and kept the people they wanted, needed and deserved to have with them, away. But amnesty.

Emily wants us to accept “whoops, my bad” for the disastrous policies, the strangle-hold on dissent purveyed by big-tech, the wealthy celebrities, elites and tyrannical leftist politicians that destroyed businesses, impacted families economically, created a disaster in schools that we are only beginning to understand. A poll in conducted by Rasmussen Reports and the Heartland Institute showed a majority Of Democrats support Fauci, quarantine camps, fines and prison terms for the unvaccinated, but sure, amnesty.

Oster writes in The Atlantic:

Given the amount of uncertainty, almost every position was taken on every topic. And on every topic, someone was eventually proved right, and someone else was proved wrong. In some instances, the right people were right for the wrong reasons. In other instances, they had a prescient understanding of the available information.

The people who got it right, for whatever reason, may want to gloat. Those who got it wrong, for whatever reason, may feel defensive and retrench into a position that doesn’t accord with the facts. All of this gloating and defensiveness continues to gobble up a lot of social energy and to drive the culture wars, especially on the internet. These discussions are heated, unpleasant and, ultimately, unproductive. In the face of so much uncertainty, getting something right had a hefty element of luck. And, similarly, getting something wrong wasn’t a moral failing. Treating pandemic choices as a scorecard on which some people racked up more points than others is preventing us from moving forward.

We have to put these fights aside and declare a pandemic amnesty. We can leave out the willful purveyors of actual misinformation while forgiving the hard calls that people had no choice but to make with imperfect knowledge. Los Angeles County closed its beaches in summer 2020. Ex post facto, this makes no more sense than my family’s masked hiking trips. But we need to learn from our mistakes and then let them go. We need to forgive the attacks, too. Because I thought schools should reopen and argued that kids as a group were not at high risk, I was called a “teacher killer” and a “génocidaire.” It wasn’t pleasant, but feelings were high. And I certainly don’t need to dissect and rehash that time for the rest of my days.

Moving on is crucial now, because the pandemic created many problems that we still need to solve.

Far-left Salon told us, “It’s OK to blame the unvaccinated — they are robbing the rest of us of our freedoms.”

Howard Stern told the unvaccinated to “Go home and die.”

Maam, you and every other “expert” in science/medicine, public policy, or education etc. owe us an apology and you should work on making it right. Simple. Emily is not right. pic.twitter.com/d1ZxFsvUgo

Hell no. I’ll never forget what the Democrats did- how they destroyed thousands of lives by forcing school/business closures, people died alone in hospitals while nurses danced because they didn’t allow visitors, thousands lost their jobs for refusing a vax, list goes on and on.

Maybe you missed the part where Pfizer employees were on camera admitting they were intentionally making life uncomfortable and inconvenient for the “unvaccinated” to coerce them into getting the jab @ProfEmilyOster #NoAmnesty pic.twitter.com/tVDjnBZ6MU

My aunt died alone, with no family allowed to be near her in her last weeks. You covid alarmists stole the most precious thing from her… family.

For all the elderly thrown into nursing homes knowing they couldn’t handle it and died alone, for all those killed by remdesivir and ventilated, for all those who lost jobs and forced to take an exp injection when they didn’t want it. The damn is breaking #Nuremberg2.0 pic.twitter.com/cp59YFGp35

The post Atlantic Writer Wants to “Declare a Pandemic Amnesty” After the Left Destroyed Lives, Ruined Small Businesses, Lied About Every Fact, and Killed Thousands appeared first on The Gateway Pundit. 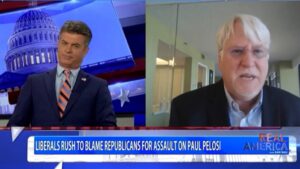 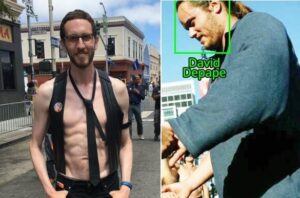 Next post “I’ve Been Aware of Him for a Long Time” – San Francisco State Senator Who Promotes Drag Shows and Sex with Minors Says He Knows Paul Pelosi Attacker David DePape (VIDEO)
Enter Your Information Below To Receive Free Trading Ideas, Latest News And Articles.
Your information is secure and your privacy is protected. By opting in you agree to receive emails from us. Remember that you can opt-out any time, we hate spam too!