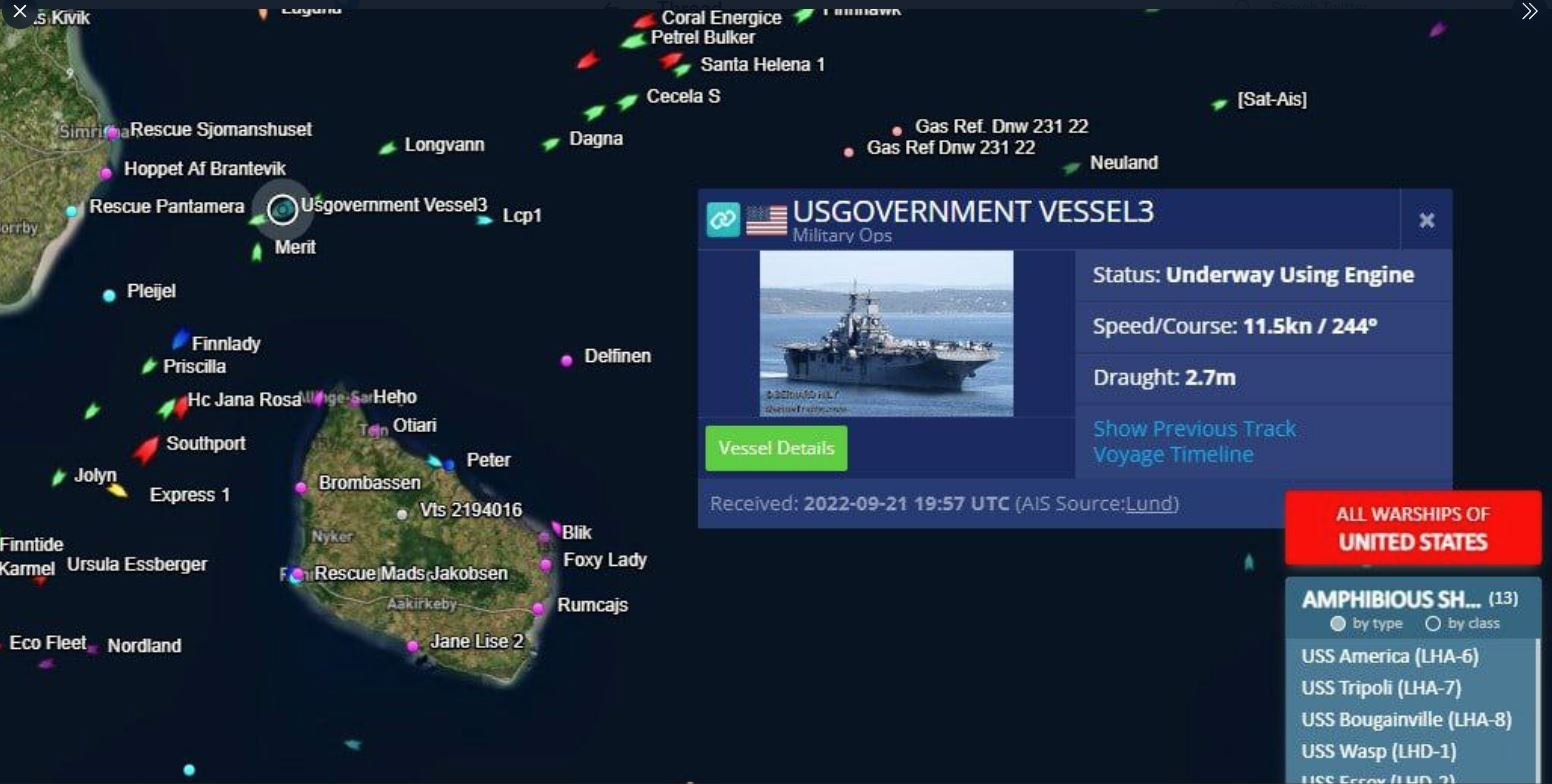 One of the three explosions measures 2.3 on the Richter Scale of earthquake intensity, but this was no earthquake. It was explosion—like a gigantic undersea mine. Via Reuters:

Bjorn Lund, seismologist at the Swedish National Seismic Network at Uppsala University, said seismic data gathered by him and Nordic colleagues showed that the explosions took place in the water and not in the rock under the seabed.

The explosions guarantee Germany and the EU won’t go wobbly with regard to sanctions against Russian energy imports. The damage to pipelines will take months repair, and repairs are unlikely to begin until next summer. Even if Germany were to cry “uncle” as civil unrest intensifies over lack of heat and energy, even if Russia decided to turn the power back on, the conduit for Russian gas to Europe is broken.

TASS reports details of the explosions:

The first explosion was recorded at about two o’clock in the morning on Monday, the second at 07:04 p.m. on the same day. Gas leak warnings were issued on Monday at 01:52 p.m. and 08:41 p.m. respectively. Vessels passing through the area reportedly notified the Coast Guard of the seething on the sea surface. Lund argues that there are usually no military exercises in the area of the incident, which could theoretically cause damage to the pipelines.

So, Nord Stream is dead, and the question becomes “whodunnit?”

To fix a crime on a suspect, police try to establish means, motive, and opportunity. If the victim was shot in his home with no signs of force entry or struggle, the suspects will be people known to the victim who had access to the murder weapon and reason to kill him. Take away any one element—means (gun), motive (gain), or opportunity (access)—and the case falls apart.

If we bounce all three elements against the reasonable suspects, one suspect stands out.

Means eliminates most suspects. Only a government with an advanced naval warfare capability could have executed the sabotage. That limits the suspects to Germany, Great Britain, France, the United States, Russia, and China.

But means also involves proximity. Chinese or French naval activities in the area would have raised flags. Geography would seem to preclude the United States except for the fact the US Navy operates in every ocean in the world with advanced war fighting capabilities. So the list of suspects with the means to destroy Nord Stream is down to the UK, US, Russia, and Germany.

So, we shift to motive.

Germany has no motive to damage its energy lifeline. Germany is highly dependent on Russian natural gas. Entire German industries are being nationalized because of the lack of energy due to sanctions against Russia and Russia reducing flow through the pipelines. Germans held massive protests over the weekend demanding Germany pull out of the anti-Russian alliance in exchange for a return of energy.

Great Britain has also suffered under the sanctions imposed after Russia invaded Ukraine in February. The British economy is in shambles, forcing the UK’s central bank to pivot back to quantitative easing. Additionally, the new government in the UK has its hands full with forming a government. It is unlikely the Brits would attempt such a caper.

Russia seems to have a motive: inflict long-term pain on Europe for sending lethal arms to Ukraine. But Russia didn’t need to blow up the pipelines. Russia controls the valves that send or halt gas flow to Europe, and she’s already turned off the spigot. Russia paid for a portion of the pipeline and expects to resume profitable energy exports to Europe once the war with Ukraine settles. Why would Russia cut off its own nose?

You see, Russia blew up their own pipeline but NOT the Norway-EU pipeline that’s right next to it and just opened today

That leaves the United States. So what are its motives?

First, the US became the number one exporter of liquified natural gas to Europe once Russia cut off the flow. German dependence on US LNG is a carrot to keep German in the sanction alliance. With winter approaching and German unrest on the rise, the State Department would have been concerned the Germans would go wobbly, reduce sanctions, cut off arms to Ukraine, and beg Putin for energy. The loss of the Nord Stream pipelines eliminates that path to renewed gas imports to Germany.

Second, the Biden family has long been tangled up in natural gas and Ukraine. Hunter Biden was on the board of Ukraine’s largest natural gas company—a position that provided Ukrainian oligarchs with access to Joe Biden. Hunter, who has no experience in energy, made millions from the deal, and Ukraine got a bought-and-paid-for President of the United States.

Third, the Democrat Biden needs to stanch the popularity bleeding that threatens to kill Democrat control of Congress come November.

But what about opportunity?

Seapower magazine—the official magazine of the Navy League—reported in June on a US exercise in the Baltic Sea, directly over the spots where two massive, undersea explosions took out the Nord Stream pipeline. And finally, we need to pay attention to the June article (https://t.co/Z0oWIzp4FT ) in Sea Power, where the Americans brag about experiments in the field of underwater drones, which they put on exercises BALTOPS 22 — just in the area of the island of Bronholm. pic.twitter.com/ZD92YkhMwa

An additional critical objective was to continue to increase the communication range and data transfer capability to give the operators more flexibility in mine hunting operations. Advancements in communication technology, demonstrated this year, have shown a significant improvement in operating ranges over currently used systems. This provides additional standoff flexibility to the U.S. Navy in conducting safe mine hunting operations.

In other words, the Navy had the opportunity to plant explosives on the pipes in June for remote detonation at the time of the President’s choosing.

And the world’s largest amphibious ship, the USS Kearsarge, was recently in the area:

An expeditionary detachment of US Navy ships led by the universal amphibious assault ship USS Kearsarge days ago was in the Baltic Sea
It was 30 km from the site of the alleged sabotage on the Nord Stream-1 gas pipeline and 50 km from the threads of Nord Stream-2 gas pipeline pic.twitter.com/RRyLJvz2dM

And only the United States had this opportunity.

Also in June, as Operation BALTOPS 22 was underway, the CIA, allegedly, warned Germany that sabotage to the pipelines was imminent: What’s more, Biden and other administration officials have signaled a willingness to use the pipelines as a means of war. Joe Biden threatened to end Nord Stream if Russia invaded.

Guess Who Threatened to Take the Russian Nord Stream Pipelines Offline Before They Were Sabotaged This Week?

Only the United States had all three elements of a crime: means, motive, and opportunity.

But possessing all three elements of a crime does not make one guilty. In addition to means, motive, and opportunity, the guilty party must also have the moral degeneracy to perpetrate the crime. Everyone who carries a gun has the means, motive, and opportunity to shoot someone at some point, but almost no legal gun owners ever commit the crime. Why?

Because most of us have moral consciences formed well enough to stop us from acting on impulse. We are, as Jefferson wrote in the Declaration of Independence, willing to suffer many abuses before pulling the trigger.

So we must ask: does this United States administration have the impulse control to resist using its massive military capabilities? Or is the administration full of people who would shoot someone over mere irritation?

To answer that, think about the FBI storming the home of a pro-life minister, robbing safe deposit boxes after lying to a judge to obtain a warrant, raiding the home of the current president’s primary opponent in the next election, or threatening pro-life pregnancy counselors in Minnesota.

FBI Agents came to talk to sidewalk counselors outside of the St. Paul Planned Parenthood today.

Make no mistake— Biden’s administration is actively trying to silence and instill fear into anyone who opposes their death cult.

Think, also, about the administration’s push to castrate little boys and cut the breasts off of little girls for the crimes of being too feminine or too masculine. Think about the United States’ fascination with drag shows for children in which a 5-year-old girl massages the penis of a drag queen on stage to arouse her parents’ prurient interests. As The Gateway Pundit reported recently:

BEYOND SICK! Drag Queen Dances While Little Girl Repeatedly Rubs Her Hand Up and Down the Crotch of “Little Mermaid” Costume While Another Drag Queen Spreads Legs Wide Open On Stage For Toddlers [VIDEO]

Is the United States capable of committing a high crime on the Baltic Sea?

Of course it is.

The United States under Joe Biden has no moral compass. It is a rudderless and deranged vessel sailing toward base pleasure using power and violence as its only justification for actions.

While we don’t know for sure whether the United States blew up the pipeline, we do know for sure the United States has the means, motive, opportunity, and moral deficit necessary to drive the world to the edge of armageddon in pursuit of power for its elites. And a former Polish Minister of Defense and current member of the European Parliament was quick to affix the blame (or credit) for the explosion: Stay tuned. Nord Stream could be the biggest story of our lifetime.

The post ANALYSIS: Nord Stream Pipelines Sabotaged, and Only One Country Benefits appeared first on The Gateway Pundit. 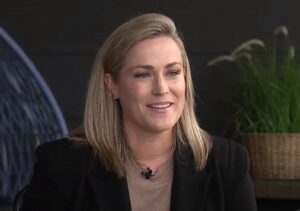 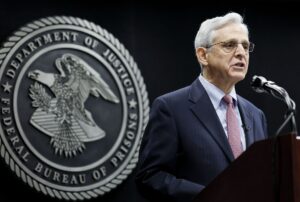 Next post 22 Lawmakers Demand Merrick Garland Explain Exactly Why The FBI’s SWAT Team Raided Pro-Life Activist Mark Houck: Why Was ‘Excessive’ Force Used By the FBI Against An American Citizen’ In Local Matter?
Enter Your Information Below To Receive Free Trading Ideas, Latest News And Articles.
Your information is secure and your privacy is protected. By opting in you agree to receive emails from us. Remember that you can opt-out any time, we hate spam too!