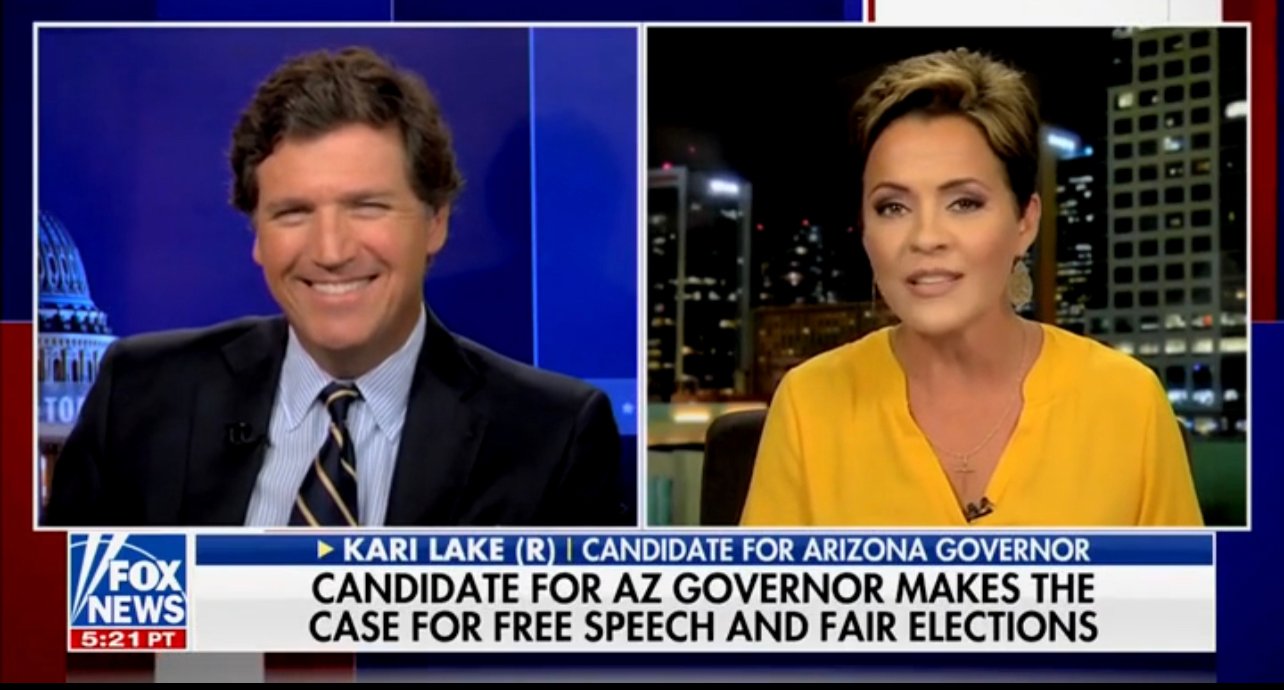 Trump-Endorsed Arizona Gubernatorial Nominee Kari Lake recently joined Tucker Carlson Tonight to talk about our right to speak about the Rigged and Stolen 2020 election that the Fake News Media attempts to hide from the American people.

They are trying to censor and cancel anybody who mentions this, despite the outrageous claims of Russian collusion in 2016 that were perpetuated by Democratic politicians and their mainstream media allies.

Democrats, including Kamala Harris, have been extremely vocal about the corrupted machines “which are vulnerable to being hacked,” according to Kamala.

The Gateway Pundit reported extensively on the Maricopa County 2020 Election audit, which discovered massive security and hacking concerns, machines connected to the internet, numerous election law violations, and hundreds of thousands of fraudulent or questionable ballots.

Additionally, we reported on a NEW Cybersecurity and Infrastructure Security Agency report that revealed massive security vulnerabilities and the potential to install malicious code in Dominion voting machines that were used in Arizona and Georgia.

And then there was Facebook and Mark Zuckerberg, who admitted to Joe Rogan that Facebook algorithmically censored the Hunter Biden laptop story for seven days on a request from the FBI to protect the Bidens before the 2020 election. Even Youtube star and pro boxer Jake Paul has spoken out against this censorship of the truth, saying, “we really don’t have real, true freedom of speech anymore, which is scary… all of these media platforms have controlled narratives by people who are paying them in their pockets.”

Not only did Mark Zuckerberg sabotage the 2020 election through disinformation and censorship of real information, but he also dumped millions of dollars into elections across the country in 2020, including $3 million to buy the Maricopa County 2020 Election.

However, the Democrats in government and the media want us to believe it was “the most secure election in American History.” And if you don’t believe this narrative, then they will smear you as a “conspiracy theorist.”

When a liberal reporter accused President Trump of dividing the Country and lying to people about the 2020 election, Kari Lake gave an EPIC response.

Before Playing the following video, Tucker told his audience, “they’ve effectively silenced all opposition, and the few who are speaking out about it, are a real threat to the people in charge. Not simply because they tried to relitigate the last election; that’s over. But because they’re brave enough to say what they really think. that’s the point. They’re brave enough to stand up for their constitutional right to free speech. And in that category, we would add Kari Lake. She’s the Republican nominee for governor of Arizona, and she makes a very good point in this clip watch:

Lake: Questioning an election where there are obviously problems is dividing the country? Since when can we not ask questions about our elections? As a journalist for many years, I was a journalist after 2016, and I distinctly remember many people just like you asking a lot of questions about the 2016 election results. And nobody tried to shut you up. Nobody tried to tell Hillary Clinton to shut up. Nobody tried to tell Kamala Harris when she was questioning the legitimacy of these electronic voting machines to stop. We have freedom of speech in this country, and you, of all people, should appreciate that. You’re supposedly a journalist. You should appreciate that. So I don’t see how asking questions about an election where there are many problems is dividing a country. What I do see dividing a country is shutting people down, censoring people, canceling people, trying to destroy people’s lives when they do ask questions. Last I heard, we still have the Constitution. It’s hanging by a thread thanks to some of the work some people in this area have done. But we’re going to save that constitution, and we’re going to bring back freedom of speech. And maybe someday you’ll thank us for that.

This is one of the best answers to the media’s 2020 election questions I’ve heard. pic.twitter.com/yYni3wwjhi

After this show of force, Tucker Carlson brought Kari Lake on his show earlier this week to talk about our great First Amendment, the media’s censorship of ideas, and her racist opponent, Democrat Katie Hobbs’ refusal to debate.

Kari also told him about her “most bold, aggressive plan” to secure the US Southern Border in Arizona. Kari plans to deport these criminals beginning on day one of her term instead of just “moving them further inland” like Arizona currently does.

Like President Trump, she’s tougher than anybody else on the border crisis.

Carlson: Yeah, exactly. It’s about free speech. At this point we may never know. And certainly, partisans on both sides will probably never know to their full satisfaction, all the details from the last election. But what matters now is that we preserve the basic freedom in this country, which is the freedom of speech. And keep in mind, in that clip, Kari Lake was not referring to something small. She was referring to something big. She was referring to an election with record numbers of mail in ballots all with laughably lax security requirements. By the way, you may have noticed that just today, Joe Biden or yesterday wanted to vote in his home state of Delaware. Did he vote by mail? No. He used hundreds of thousands of dollars in public money to fly Air Force One to Delaware to vote in person. So apparently, Joe Biden doesn’t trust mail in voting and why would he? And why would any of us be satisfied with the fact that democratic partisan Mark Zuckerberg was allowed to spend nearly half a billion dollars to control the mechanics of voting in many places? So why wouldn’t Kerry Lake have questions about that? Why wouldn’t all of us have questions about that, including honest Democrats? Well we would. Anyone who cares about this country would have questions because asking questions is not a crime. It’s a duty.

Leaving aside whatever anyone thinks about the last election — you made the clearest defense of free speech that I have seen this year.

Lake: Yeah, it’s pretty simple. We go back to this old document called the US Constitution, and I spent 30 years, Tucker, as a journalist. So the first amendment is pretty darn important. And they seem to be taking that away from us right now. But, you’ve described basically the left’s hypocrisy, and you’ve described that old saying: when they’ve lost the debate, they resort to slander, and that’s what we’re seeing right now.

Carlson: And I think you have really provocative and, in my view, true things to say about, for example, immigration, but those aren’t covered because you’re a “big lie adherent.” Do you believe the media uses that slur to make certain people won’t hear what you’re saying about the issues?

Lake: Oh, for sure. I mean, if they aren’t bad-mouthing me and running hit pieces on me, then they will have to talk about the issues. And when you look at our policies, our America First-Arizona First policies, once they start covering that, it’s game over, we win in a landslide, and then they’re stuck with me for eight years, and I think I’m a nightmare for the liberal media in Arizona.

Carlson: Last I checked, your opponent was refusing to debate you, citing NBC News and CNN saying, “she’s crazy.“ Can she get away with that?

Lake: Well, she seems to be getting away with it. I mean, she’s getting raked over the coals even by the mainstream media. But, it tells you how little her staff and her supporters think about her. They would rather her get just trashed right now in the media than show up for a debate because they know that she has no policy to stand on. I mean, if you look back at when she was a legislator, she voted against the border wall. She voted against a virtual border wall. She voted to get voted against funding border security, but yet she did write legislation to make sure we start teaching sex education in kindergarten. Her priorities are whacked. And the people of Arizona are really turned off by the fact that she won’t show up for a debate. It’s a job interview. The people of Arizona are the hiring manager, and we’re showing up for a job interview. You don’t get the job if you don’t show up for the interview. But she knows that she will get roasted on stage because of her background.

Carlson: I can see why they’re trying to silence you. Since you’re here, I just have to throw this at you, and because you live in a border state that has borne the brunt of the lawlessness on our border. We’ve just received digital footage of illegal aliens being dropped off in Martha’s Vineyard. Apparently, the Governor of Florida, Ron DeSantis, flew them there on the idea that communities, border towns in Texas and Arizona are bearing all the brunt, and maybe the people who make these policies should have to live with them. What’s your view of this?

Lake: You know, I actually get a kick out of it watching these liberal mayors just, you know, throw their hands up and say we can’t handle it because it’s life every day for us in these border states. However, I’m not a fan of it, Tucker. I mean, we’re just taking people here illegally who shouldn’t be here. We’re moving them further inland. My plan is the most bold, aggressive plan on the border. We’re going to secure the border. We’re going to call it what it is and issue a declaration of invasion on day one, get troops on the border in the form of our National Guard. We’re going to stop people from coming over. And we’re going to stop the cartels from having control of our border. I don’t like it as a mother, and I know no Arizonan likes it that we are the pipeline for the most dangerous, deadly drug this country’s ever seen called fentanyl. Number one killer of young people. It’s all coming through Arizona, because Joe Biden gave control of our border to the cartels. And on day one, we’re going to invoke our article one section 10 authority and take back control of our border away from the Federal Government. It’s a dereliction of duty what they’ve done, and we’re not going to let Joe Biden drag the state of Arizona down while he’s trying to destroy this country.

Carlson:  Boy, I can see why they’re trying to stop you.

This is why President Trump has said, “Kari Lake will go down as the greatest Governor in our Country’s history,”

The post “I Can See Why They’re Trying To Silence You” – Tucker Carlson On Trump-Endorsed Kari Lake After She Gave THE BEST Response To Propagandist’s 2020 Election Question appeared first on The Gateway Pundit. 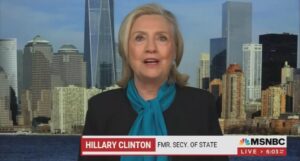 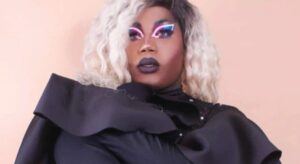 Next post Drag Queen Dies Mid-Performance at Philadelphia Bar
Enter Your Information Below To Receive Free Trading Ideas, Latest News And Articles.
Your information is secure and your privacy is protected. By opting in you agree to receive emails from us. Remember that you can opt-out any time, we hate spam too!